From Box Files to the British Science Festival: Part Three

Here is the much awaited third part of the story of the making of MIRAGE:

Recall that I had solved the problem of having a small cursor appear in the same place as the hand and have the cursor move about independently of it, but I had not solved the problem of the cursor looking nothing like a hand. There were several ways in which I could have addressed this issue and, after careful consideration, I went for the easy option. I took a picture of a passing Ph.D. student’s hand (Catherine Preston) and simply replaced the cursor with this picture. Now, I had a life-sized hand moving about in what appeared to be the same place as the subject’s real hand. It was not their real hand (and it only ever fooled one person) and I was stuck with a female hand, but it was a hand, nevertheless. This set up was used in a Transcranial Magnetic Stimulation (TMS) study investigating agency attribution (distinguishing between self generated action and action generated by other agents) and the right hemisphere (Preston and Newport 2008, published in SCAN). 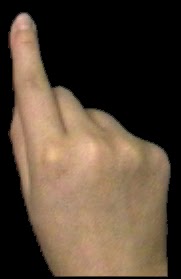 Hand image used for this version of MIRAGE

The surrounding framework had also moved on, from box files and blu-tack to a homemade wooden structure. It would have cost me almost a thousand pounds to have a proper one built, but I didn’t have any research money, so I ignored all health and safety procedures and decided to build my own. I did most of this in secret, using the cover of students waiting noisily for a lecture in the corridor to drown out the noise of sawing and hammering. It was only after I nearly cut my own ear off with a power tool that I decided to tell anyone what I was up to, just in case I went missing for a few days and no-one thought to investigate the spreading pool of blood seeping out from under the lab door. Unfortunately, my woodworking skills were only as good as my Grade C O-level and the whole thing came tumbling down on a patient that Catherine was testing. At that stage, we decided to do things properly – and went to IKEA.

Next Time: IKEA, a boot, technological advancements and the first idea of what I might have inadvertently created.